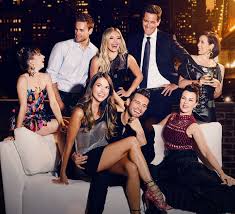 My latest reading for the year was an interesting novel – Younger by Pamela Redmond (2019 edition). It’s interesting for two reasons. First, the story itself is intriguing and captivating. Second, and perhaps more interestingly, because it was the foundation of the cult-hit TV show of the same name. Actually, it’s rather interesting for a third reason too… the copy I had was extensively “updated” from the original 2005 version which won Redmond fame and a TV contract, with the characters brought into the here and now with plenty of modern-day references like I-phones and Grindrr apps. (By the way, dear readers no, I don’t have any plans to do the same to my book, Grace, Fully Living to leap Grace ahead two decades.)

The basic premise of the story, both on printed page and on the TV screen, is that a recently-divorced 40-something woman decides to go back to work after spending the past couple of decades at home, being a homemaker and mother to a girl who’s now college-aged and overseas. She finds it difficult to resurrect her once-promising career in publishing, and senses that bosses think her too old and inexperienced to be useful. Enter her best friend, Maggie, an avant garde lesbian artist, who goads and helps her into trying to look, dress and act younger… 26 in fact. With the new attitude, wardrobe and fuzzy resume, she gets back into her old field and finds new romantic interests. Of course, she lives in a constant low-level sense of fear with so much riding on her being assumed to be a perky young Millennial rather than a middle-aged mother.

The show on TV Land is now in its sixth season, with plenty of twists and turns in both her work life and love life. The book however, is narrower in range, covering just the first year she attempts to pull off the “younger” life. It’s one of a number of differences between the two. This part made it all the more interesting to me, as seeing the finished on-screen product, it was cool to see what the writers kept and what they altered from the original template.

As I said, many things are the same… the basic facts of the heroine, her attempt to pull off being almost 20 years younger, her young love interest in Josh, her picky and prickly boss at the publishing house she goes to work at, her daughter’s mercurial nature and eventual return from charity work overseas, and Maggie. For all the similarities, there are differences aplenty.

Even the names have been changed. Our protagonist we all know as “Liza” on TV is Alice in the book. Her work friend played by Hillary Duff on the show is known as Kelsey there; Lindsay in the book. Other names are altered, although one which isn’t  Charles. The handsome boss on TV is… Mrs. Whitney in the book? Actually, his character doesn’t exist in the novel, with the boss being an aging feminist writer whose only interest in Liza/Alice is her ability to come up with modern covers and prologues for their catalog. Happily for Josh, no rival for the heart of our heroine appears on the pages. Meanwhile, Maggie is obsessed with becoming a mother in the book rather than finding a hot new lover, as the TV version is. Last but not least, her book stint at the publisher is abbreviated rather than years-long and elevated. She does however, find something creative and useful to do after the job in the book. You’ll need to read it to find out what that might be.

In short, the TV show centers largely around the dilemma of Liza needing to choose between the two loves – the age-appropriate (for 26 year old Liza) and fun Josh, or the age-appropriate (for by now close to 50 year-old mom Liza) successful and polite Charles. And, how far Liza and Kelsey can take their own division of the company with its “Millennial” titles.

The book, on the other hand, revolves around the conflict within Alice as to whether or not to follow her heart about Josh, whom she feels deep down too young and too likely to be disappointed in her down the road and the themes of motherhood played up by the ironic contrast between her and Maggie. She has spent much of her life being a mother and suburban housewife and wants to cut loose a bit; Maggie’s spent her life being wild and living the downtown life, now she yearns for something more domesticated white bread and apple pie.

Both are quite entertaining and at least enthralling enough to keep one turning the pages or turning on the TV week after week. As Redmond says in the epilogue, “when you sell your book to TV or movies, you sell the rights for them to do whatever they want to your characters and stories.” She adds she loves the show and thinks Darren Star has “stayed true to the characters and spirit of the book while making some great additions.” That he has, and necessarily so. If true to her original book, Younger might have made an interesting movie but would never have the legs to run a show with episodes running for years.

All in all, a good enough book which will be all the better for fans of the show.

Disney likes to say that Disneyland is the “happiest place on Earth.” If indeed the happiest place is in Anaheim, the runner-up may be in Rochester, NY… The National Museum of Play, which includes the Toy Hall of Fame.

Many of us probably had no idea there was a Toy Hall of Fame, but hey…if everything from bowling to darts to aviation having their own, why not something that “play” such an important part of most of our childhoods?

The Toy Hall of Fame is a part of the Museum of Play, which began in the 1960s as “The Strong” – the Margaret Woodbury Strong Museum of Fascination. The 156 000 square foot building has added exhibits and wings since and in 1998, someone had the idea for the Toy Hall. They aim to recognize toys which are icons, being widely recognized and remembered; exhibit longevity and promote learning or discovery. They give bonus points for those which are seen as “innovative.”

The first year, they inducted 11 toys which are about as classic as they come: baby dolls, Barbie dolls, Crayola crayons, erector sets, Etch-a-sketch, Frisbees, Lego, marbles, Monopoly, Playdoh and teddy bears. Since then they’ve added in some 57 more including Atari game systems, Big Wheels, checkers, Dungeons and Dragons, GI Joe dolls, Gameboys, rubber ducks, and View Master. A handful of more “out of the box thinking” toys have made it in too, like blankets and sticks!

The newest additions last year were the Magic 8-ball (it could’ve told you it’d be in if you asked it!), Uno and pinball machines. This year they’ll add two or three more from a list of nominees including Jenga, Care Bears, coloring books, Risk, Matchbox cars (which you might recall, if of a certain age, actually were sold in “matchboxes” at one time), the Fisher Price corn popper, and most controversially, Smart phones. I’d never heard of the corn popper, but recognized it as soon as I saw it, the little push-along on wheels developed in 1957, which the Hall says was not only fun but promoted motor skills and curiosity.

I’ll be pulling for the coloring books and Matchboxes (the racier Hot Wheels already made it in), parts of my childhood memories to be sure. I think back to my childhood and the toys I remember mostly, that I spent the most time with and got the most out of were toy cars like Hot Wheels and Matchboxes and Lego. Sometimes they’d go together, with me building buildings and driving the little cars between them. I loved the futuristic designs and bright metallic paints on the Hot Wheels , which could be raced on their trademark orange tracks as well, but also loved the realism and attention to detail of the Matchboxes. Although it bothered me immensely that they weren’t all to scale. A giant dumptruck or Greyhound bus Matchbox were the same length as a Volkswagen or Ford Capri. I rationalized that the Greyhound should have been about three times as long, because… well that’s the type of four year old I was!

I particularly liked Lego. Lego back in the ’70s was a bit different than most of it today. I mean, sure the bricks snapped together and came in bright colors as they still do but back then, they just came in big assorted boxes. I loved using my imagination to put together houses of my dreams, with the windows and doors where I wanted, the architecture my choice. Many a cold winter afternoon was spent building up houses, towers or cities of the future on the living room floor.

There weren’t any Batman or other cartoon character Lego people and there were basically no blueprints. No rules or limits. When I pass by the kdis sections of stores these days, the Lego kits are all very detailed and specific. build this car or this spaceship or that home with the bricks in this box. Not one brick too many or too few, just follow the instructions. It bothers me that today’s kids, if they actually step away from the electronic screens long enough to pick up a Lego set, will have so little incentive to use their imagination.

Now, learning to follow instructions is important, no doubt. But so too is thinking independently and creatively. Using one’s imagination. Flights of fancy. I learned to follow rules and instructions just fine through school, family life, even toys which required careful attention to detail, like plastic models of trucks. Would be silly to have had the transmission on the cab roof or headlights on the back of the frame, after all. But I’m convinced toys like Lego helped me imagine things and create, tear down what didn’t work and feel proud of what did. those skills have made me a part of the person I am, the writer part, the photographer part. Probably the “interesting” part actually!

What about you, dear readers? What toys were important to you when you were a kid? How did they help you become who you are today.

I can only wonder if today’s youth will look back as fondly on Fortnite or Vine videos four decades from now.