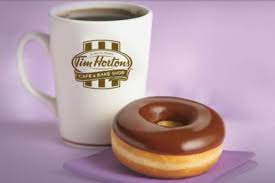 This Thankful Thursday I’m thankful for one of my fonder memories of Canada – Tim Horton’s. Only a few Americans know what that is, and fewer people still from other countries. But to Canadians… they’re a way of life and as much a cultural keystone as maple leafs and geese.

Tim Horton’s, or simply “Timmies” to many Canucks, is a chain of coffee shops. Diners perhaps would be a better word since they offer an array of foods as well. But they are a great deal more than that up north; not only do they define the national obsession with coffee and the “down to earth” mentality, in many communities they have become the de facto “town square” – the meeting place, the place to hang out when you don’t want to be by yourself. Quite an achievement for something begun in the ’60s by a second-string hockey star as a single little coffee shop in the factory city of Hamilton.

Today there are over 4000 of them, the vast majority of them in Canada, although Americans close to the border – those in Western New York, Washington State and the like – have some of their own, perhaps as much for the Canadians driving south as the locals. Although they started out as simple purveyors of cheap coffee and a range of donuts (another Canadian obsession, and something Tim’s does very well) they have through the years expanded the menu to have a number of lunch options from sandwiches to soups and chili, and even brought in cold soft drinks for those who for some difficult-to-understand reason don’t always want a hot coffee! As such they’ve become a viable competitor to the various sub and burger places in the fast food market.

Through the years, I consumed many a cup of that java. Many a thousand cups, actually. When I was going somewhere in winter, there’d always be a Tim Horton’s along the way to stop and get a coffee at and quite probably, get rid of the last coffee, if you catch my meaning. Many a work lunch break was spent sitting in one, a cup of coffee and a bagel with cheese (their poppy seed bagels are pretty extraordinary too) as I read the newspaper and forgot about the job for half an hour. I’ve taken dates to Tim’s, sat and chatted with my dad for many an afternoon, packed my laptop and sat in one late at night when the wi-fi at home gave out. I might add that I wasn’t convinced they offered the best coffee of any chain in Canada; but they were the one that was always there for me. And the 33 million others in that land.

And therein was the appeal. Tim’s are a unifier there, a totally democratic sort of institution. The prices were reasonable, the décor comfortable but very basic. It’s the place the grubby street people go and sit in when they’ve panhandled up enough for a drink and a donut just as much as they’re the place the office execs from the shiny city towers stop at to get their cruller and double-double at on their way to work. If Ryan Gosling or Bryan Adams are back in their hometown, chances are if you wait long enough, they’ll be at Tim’s. The local cops are likely to be there between calls, just as are the teens coming home from school, the socialites heading out for a night on the town and the retirees who don’t have a lot to do during the afternoon hours. So they find the Tim’s and each other and then have something to do in the afternoon. So engrained into the culture are they that they’ve even added to the lexicon. “Timbits” anybody? “Roll up the Rim?” The Canadian in the crowd will know.

That sort of thing doesn’t really exist in the States, or at least not in my part of them. Coffee isn’t king down here (mind you, I guess it takes a special breed of crazy to be like me and want hot coffee day in, day out, in a place where half the year days top 90 degrees) and of course, there is a Dunkin’ here and there if you search them out, and a few Starbucks but it’s not quite the same. Dunkins seem a place to get in and get of quickly; Starbucks are pricy and have a sort of elitist air to them. They’re all places where you can get a hot drink, but not a place to go.

While there isn’t a Tim’s shop for about a thousand miles from here, at least we can get the coffee in imported bags at the supermarket. So sipping one in my own room isn’t like being in a busy restaurant watching the world go by, it is pretty good “jo”. And a nice reminder of where I came from.