This Thankful Thursday… err, Saturday in reality – I’m thankful for Allie Dog. Long gone, sadly, but remembered fondly as the only dog I’ve ever had. A bit of backstory.

I love animals, but have allergies. We never had pets when I was a kid, save for a fishtank for a bit. This saddened me a bit, but was just a fact of life. I particularly like cats, and most of them seem to take readily to me, so if not for allergies, it’s likely I’d have been surrounded by kitties over the years. As my dad grew older, he turned into a Cat Person, taking in a couple of tiny black kittens and putting food out for neighborhood strays.

Dogs however, were a bit of a different story. Not only do they seem a bit messy, they can be frightening. While I’ve always been OK with little dogs, big ones tend to scare me. I’ve had too many run-ins with boxers, German shepherds and other similar ones running loose to take fondly to them. And as luck would have it, despite being chased through a city street by a doberman (which had gotten loose from an auto shop) once, the only time I actually ever got bitten was by a Black lab, of all dogs. Supposedly the friendliest of pups, I seemed to come leg to face with the one and only mean-spirited representative of his kind. I was a teen and hiking through an urban woodlot when one rushed me, took a chomp out of my thigh and barked ferociously. Besides ruining a good pair of new jeans, it also necessitated a trip to the ER, a tetanus shot, and a call to police, who found the dog, just as aggressive as advertised, and took it in. Luckily it wasn’t rabid. Since then, I was particularly disinclined to like big black dogs.

Of course, God or fate or karma, whichever you prefer, has its sense of humor. Fast forward about thirty years, and my sweetie (also with fur allergies) are living a nice domestic life in happy, dog-free house when one of her distant relatives had to move and couldn’t find anyone to look after his dog while he got settled in to his new digs. She volunteered to look after the dog while he did that. A week, two tops, we figured. I was not amused and the dog and I seemed to view each other with suspicion when it came. She was set up with a food dish and water and an old doghouse in the backyard and seemed dejected when her owner took off, leaving her behind.

You can probably guess the rest. The one or two weeks became well over a year. The dog, Allie, seemed glum the first few days in a new home without her familiar person. We had a leash; eventually I apprehensively put it on her and tried to see if she’d walk. She did. It didn’t take long for her to decide I was the best human around, and me to notice Allie was the best dog in the world. She was a quiet dog, a definite plus to me. Her bark would scare off the most hardened burglar, I’m sure, but it would almost take someone trying to break in to coax her to show that. I’d spend time with her out in the backyard, and rain or shine, we’d go for a walk to the park down the road every day. Although by “walk”, I tend to mean “jog”…Allie was always energetic and ready to examine the next smell along the way. It was a daily highlight for us both.

Inevitably, over a year later, her original owner returned and took her back. It was a sad day in our household. However, the already aging pup (we figure she was about 12 at the time) lived a few more happy years and I got to see pictures of her frollicking in the Gulf of Mexico, quite enjoying it before she took off to the Happy Butt-sniffing Grounds of the doggie great beyond.

So here’s to pets. They add so much to our lives and ask so little in return for their friendship. And to the unexpected circumstances. Allie showed me again that life’s detours don’t always lead us into unwanted areas. 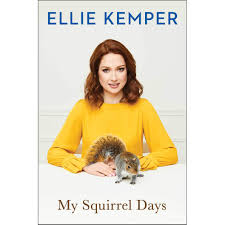 I’ve been reading through actress Ellie Kemper’s book My Squirrel Days this week. Considering the heroine in my novel Grace…fully living is a perky redhead and the network show that appeals to me most among the new crop features carrot-topped Zoey, .I think I might have a bit of a “thing” for redheads. Or books about squirrels.

Anyway, one story The Office actress relates is of Waldo, a plush walrus toy who “wears a small white sailor’s cap that suggests he is not opposed to a good time!” While other bits of her childhood fell away, Waldo stayed with her until one fateful weekend in Vegas, when she was in her 30s, that he disappeared. (Spoiler alert: the hotel found him and returned him to Ellie! Yay!)

I understand. I live in a household of two things. People who are allergic to, well pretty much everything, and a house of plush critters.

I never had a pet as a child; my allergies wouldn’t allow for a dog or cat, and I was probably the only one in the house who saw appeal in reptiles. (“Hi Fido”, I’d dream of saying to someone with their pet schnauzer, “this is my Timmy. He’s a timber rattlesnake. Aren’t those golden and brown scales beautiful…”) . When I was on my own and in my late 20s, I got a hamster named Henley. I got him a nice terrarium with a wheel and a ladder thingy for him to climb, and changed the wood chips regularly. Unfortunately, Henley taught me two things. One, that hamsters slept all the livelong day and then got up to run on squeaky wheels all night long. And two, that when freed from the confines of their home terrarium, they’d enjoy biting me, and disappearing into the ductwork in about equal parts. I was sad when one day after I’d shared my apartment with him for about two years that I noticed Henley hadn’t been up for a night or two and wasn’t eating the food I gave him… but not sad enough to think of bringing in a Henley Jr. Henley was a good little dude though, and I think made a wonderful Christmas card insert one year, posing in front of some yule lights.

I always liked cats, but not sneezing, let alone having trouble breathing. As luck would have it, the first lady I ended up close enough to to actually live with for a year had three cats. Remarkably, the one which had a reputation for hating people took to me. After a few months, Daphne would wait for me by the door like a puppy and seem to be as happy as a pup when I came in. More remarkably, I sneezed very little in that year. Unfortunately, her owner didn’t respond as eagerly to me when I got in, after awhile.  Go figure. As soon as Daphne was dragged off with her owner and I returned to my homeland, pretty much every cat I’ve met leaves me wheezy and short of breath within minutes. Which is better than the reaction my sweetie has to them. Dogs? Pretty much the same. We had to dog-sit a black lab called Allie for over a year, and Allie was a good dog! Good doggie!! My walk with her was a daily highlight for both of us. But Allie was largely an outside dog, and when indoors, she usually bedded down in the little pseudo-home we made for her in the garage. When it got real cold, she was invited into the living room, to lie on a sheet which would be washed every day afterwards… while we all sneezed, sniffled and wheezed.

But we do have some “furry” friends to keep us company, like Ellie does. No walruses but some classy “friends” nevertheless. My sweetie has her big bear, Diva, who wears a leopard-print jacket. And her doting bear boyfriend Cocoa, who inexplicably is a white bear. But he has panache as we see in this photo:

Her daughter, the Kiddo loves sheep. So she has a collection of stuffed lambs. Prominent among those are Fluffers and Luke. Fluffers, the fluffiest of sheep, originated in Canada, where “someone” found him one Easter and sent him down to Texas to be with her about eight or nine years back, when Kiddo was much smaller. He’s sweet and quiet, like a Canadian, and fluffy like a …well, something! Then there’s little rambunctious Luke the ram, always getting into things, and tipping over due to the size of his nose. We see him riding Fluffers here: 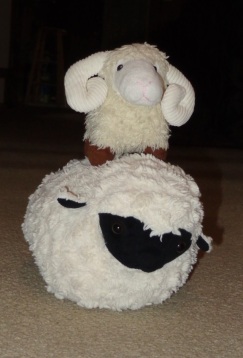 For years, I didn’t have such accompaniment,but this year, going through a local department store I came across this little fellow. 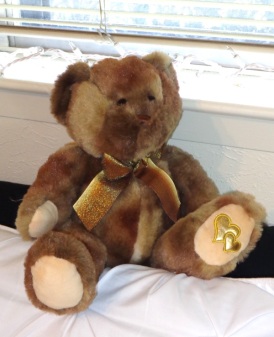 It was just after Valentine’s Day and no one had taken him home, and I feared his future was to end up on the Island of Misfit Toys. So I adopted “EB”. Which stands for Edward Bear. The name of a fine Canadian band, and the real name of Winnie the Pooh, the gold standard of friendly bears. Or possibly it stands for “Evidently Brown.” Or perhaps “Everybody’s Buddy.”  Or even “Exceedingly Bugged (by a lack of pizza.)” EB likes pizza. He obviously has style,, since he wears a snazzy bow tie. And likes pizza. He’s happy now that he has a home, watching TV with sweetie and me…and Diva and Coco Bear too!