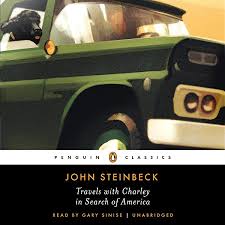 Recently I read and reviewed Our Towns, a contemporary book documenting a couple’s travels across the U.S. with their stops in a variety of cities and towns. I compared it to a modern Travels with Charley, which made me decide to read that John Steinbeck non-fiction classic. Actually I should say re-read, as I discovered that gem probably close to three decades back when I was going through a period of trying to read classic “literature” and found it a short hop from Steinbeck’s novels to his travelogue.

For those unfamiliar with it, Travels with Charley is an account of a trip around the perimeter (more or less) of the Lower 48 that the celebrated writer took some 60 years ago now. He drove the miles in a pickup with a camper back, with his big poodle, Charley along for companionship. It was eminently interesting and well-written and mixed a yearning look back from the aging writer with glimpses of a marvelous future. Now, it’s more a look back and a measure of how we’ve changed. And how we’ve not.

Some things are indeed changed, and for the better I’d say since 1960. Our idea of “men” has evolved, more in some areas than others, but 1960 Steinbeck was still of the generation that settled differences with fisticuffs, more often than not in a bar, and hunted because there was stuff to kill. He lamented only seeing two fights along the way and packed along a rifle and shotgun, more just to fit in than to utilize them. He seemed to lament that he was tired and didn’t feel like shooting coyotes he saw in the desert, all the while worrying about Charley while in New England, fearing his dog would be shot as soon as it exited his truck by over-zealous gunmen who’d think it a deer. He shares stories of old logs being full of lead and cows being shot by wonderful “outdoorsmen” who assumed them deer. Doubtless we still have deer hunters and hunting season, but it’s encouraging to me that we have somewhat more respect for wildlife – and dogs and livestock – than we did in that day and age.

Another thing John lamented was the disappearing regional dialect and accent. He said upon reaching Montana “here for the first time, I heard a definite regional accent, unaffected by TV-ese.” He feared that the telly would soon wipe out every regional variation in dialect and accent and we’d all be talking like Walter Cronkite or Lucille Ball before long. My sweetie works in Customer Service for a company that operates in about a quarter of the country; she can assure you that just hasn’t happened. Sometimes it’s difficult to know that Cajuns of the backwoods of Louisiana are even speaking English, and there’s no mistaking the Bostonians who drive their cars by turning on the “khakis” or the traditional Bronx cadence from just over a hundred miles away from there. Native Mississippians sound little like native Minnesotans although they’re bound together by one great river. Myself, I’ve been asked where I was from many times when in Atlanta (usually in a friendly but inquisitive manner) and in Texas had one woman suggest “You’re not from here – is that a Chicago accent?” I told her no but not far off… I was from another Great Lakes city. We southern Ontarians don’t think we have accents, but we sound different to those in the Lone Star State, even if we watch Friends and Masked Singer shows together. Steinbeck misread the future on that.

Another difference is not in the story, but the reaction. Steinbeck was amazed at the mobile home parks springing up everywhere, and was in awe of them. It was a new phenomenon which made eminent sense to him. “They are wonderfully-built homes, aluminum skins, double-walled, insulated…” and convenient, he figured. “If a plant or factory closes down, you’re not trapped with property you can’t sell…he rents a trucking service and moves on” to the next city with the next batch of jobs waiting. Now, I daresay Steinbeck wasn’t wrong in the convenience or affordability of them, but for better or worse, very few these days share his sunny take on them and the parks they are located in. Ugly it is, but true as well that a good chunk of the country automatically look at the residents not as smart, adaptable people but uneducated, dirty dolts. Why else do we all understand what someone means when they say “trailer trash.”

Some things never change though, one of the big examples in the U.S. being the Texas spirit. Steinbeck says “Texas is a state of mind. Texas is a mindset” and in fact, “a nation” even. He notes the huge state varies from flat farm fields covered in snow in winter in the Panhandle to sandy Gulf beaches and citrus orchards along the Rio Grande… nothing in common but for the energy and bravado of the residents. Not to get him wrong, he says he likes Texas, married a Texan and was treated with fantastic hospitality when in the Lone Star State. He points out at home, Texans tend to be friendly and welcoming, but as soon as they pass by Texarkana or El Paso they feel self-conscious and ill at ease and turn into the loud, boorish Texans of Hollywood stereotypes. Sentiments that seem about as apt today, as I write this from Fixer Upper-land, as they were to him back then.

Sadly some of the worst things Steinbeck documented are still among the truest. He lamented the bland highways, saying one could drive from New York to L.A. without seeing a thing, and that the cities they line are coming to all look the same, with the same chain stores and takeout restaurants. If he thought that then, imagine if he could see it now that McDonald’s have served “billions and billions” and Walmart isn’t just a small town five and dime in the hills of Arkansas!

Perhaps the most glaring example of “the more things change, the more they stay the same” though probably makes the book hit many book clubs and reading lists this year again, that being discrimination and racial unrest. He speaks of growing up in a town where there’d only been one Black family, and they were well-liked, hard-working people no one had any grudge against; spoke of being reluctant to even visit the “South” due to their attitudes and hearing time and time again speeches against desegregation and jokes about thinking Charley , his darkish dog, was a “N”word, time and time again before he even left Texas, let alone hit Mississippi and Alabama. He watched in horror as crowds gathered along the street to yell insults at one tiny Black girl being led into a “White” school in New Orleans by federal marshals. Certainly the circumstances have changed and progress has been made, but it’s discouraging so much of the national debate and daily news still revolves around racial problems in the land.

One universal Steinbeck uncovered unintentionally in his wanderings seems the same for any long distance voyager, be they astronauts, merchant marines, Ewan McGregor riding his motorbike across continents or even Dorothy in Oz: the trip that begins a happy adventure becomes a drudgery, a mere race to the finish line in its last miles. Visiting is great, it would seem, but really there is no place like home.