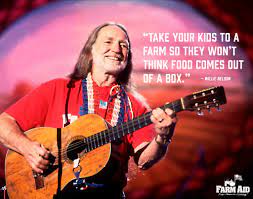 As many of you know, I also do a daily music blog. Recently while writing pieces I featured Janis Ian. Janis is a singer who had one big hit in the 1970s, “At Seventeen” and has periodically recorded since as well as written a few books. But an interesting sidebar to her story is that she also runs a charity called the Pearl Foundation that raises money for scholarship for adults returning to school. I think that’s pretty great and noble. To date, with her help it’s given out over a million dollars to help further the education of people who might not otherwise be able to go back to school to better their lives. The same week I looked at Farm Aid, a charity designed to help out struggling small family farmers around the country. It was started as a one-off rock concert in 1985 set up by John Mellencamp, Willie Nelson and Neil Young. Little did they know back then that it would still be an ongoing event, and they’d all still be performing almost every year and the charity a round-the-calendar organization assisting farmers and lobbying for their interests. Again, a very worthy cause. So, this Thankful Thursday I’m thankful for celebrities who use their fame (and quite often money) to help others through such events and organizations.

There’s no shortage of them of course. Elton John has worked extensively for various organizations helping AIDS patients. Peter Gabriel brought Amnesty International onto the radar for millions of his fans by talking about them and having booths of theirs set up at his concerts. And of course, it’s by no means limited to the music world. Actor Gary Sinise became a hard-working advocate for disabled veterans after playing one in Forrest Gump and being contacted by many real-life people with stories like his fictitious Lt. Dan. Reese Witherspoon has been involved with a number of organizations promoting improving childrens’ lives in the Third World, helping battered women and encouraging reading. And the list goes on and on.

It’s often said we idolize our entertainers far too much. Perhaps true. Also true is that the bar keeps being lowered for what it takes to be considered a “star”. These days a “leaked” sex tape or filming yourself walking around dollar stores pointing out new items with a little bit of panache are sometimes all it takes. We can debate what this means for society in general, but while it is the case, I say more power to those who find that rising star and use the enormous pulpit they have to influence their fans and make the world a little better.