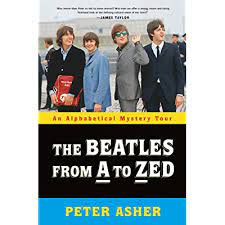 I love music and love reading, so no surprise that I love well-written books about the music that I like. I just finished one such volume – The Beatles From A To Zed , by Peter Asher (and yes, he makes a point of it being “zed” since they’re British!). It seems it was written as a companion or erstwhile script to a satellite radio show he has, thus it reads rather conversationally but it’s fully enjoyable as a standalone book.

Asher, as many fans of the Fab Four know, was a musician that knew the Beatles when they were just starting out. His sister dated Paul McCartney for several years and in fact, Paul even boarded at Asher’s house for awhile while young. McCartney wrote “A World Without Love” which John Lennon didn’t like so he offered it to Asher, who recorded it as part of the duo Peter and Gordon. He kept in touch with Paul and the others, joined Apple Records as a talent scout and producer and eventually moved to the States to spearhead James Taylor and then Linda Ronstadt’s careers. So he has a lot of interesting stories to tell about the Beatles and the music world of the ’60s and ’70s in general, and relates some of them in the book, including quite an in-depth look at how “A World Without Love” came together and how in awe of Paul’s writing abilities he was as he seemingly came up with a bridge and fixed the chorus spontaneously when he knew his friend wanted to record it.

Anyway, the book is set out, as you might guess, in 26 chapters, one for each letter. For each he looks at songs which start with the letter in question, or other things related to the Beatles (for example, a section on “oboes” for the letter “O”); in most cases picking a Beatles one as well as one from each of the four post-Fab Four. Of course, some letters are more challenging than others… for “U” for example, he substitutes the word “You”, and for “X” he looks at “ex-Beatles” like Pete Best. Along the way he talks about everything from hearing “Hey Jude” for the first time to impressing friends by playing “Help” to them before it was officially released to watching TV evangelists on late-night stations in the U.S., and how that actually inspired a #1 hit. He points out he’s not an expert in either the Beatles nor music, so most of his choices are personal recollections or opinions – which songs he likes the best and why – although, as a musician, he does give some pretty detailed explanations on some things musicians will love. How the pairs of strings are tuned differently on a Rickenabacher 12-string guitar; the rapid-fire time signature changes in “Here Comes the Sun” for instance. But more of the content is his memories of hanging out with Paul (and the others to some extent) and his own reactions to hearing some of the great music for the first time.

It’s a light read but a thoroughly enjoyable one. It left me with an added appreciation for all four of the Liverpool lads and a yearning to go listen to some of their records all over again.

I give it 3.5 Yellow Submarines out of five.

5 Replies to “The Beatles From An In-house Observer”