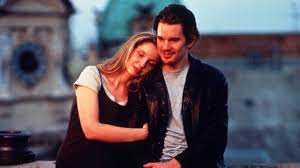 This time around, I check off one of the more interesting categories in this Hanspostcard Movie extravaganza – the “Series”. Films with stories so nice they had to be told more than twice! My choice in these is the Richard Linklater “Before” trilogy.

The trio of films looks at the evolving relationship of a bi-continental couple, Jesse and Celine as it evolves over nearly twenty years. It begins with Before Sunrise, a 1995 under-the-radar date movie fave, continues with Before Sunset in 2004 and (for the time being) ends with 2013’s Before Midnight.

The stories involve American Jesse and French mademoiselle Celine, played by Ethan Hawke and Julie Delpy respectively. A spoiler-laden overview would be essentially:

Gen X-ers who grew up an ocean apart meet on a train in Europe. Celine is on her way back home to Paris after visiting her grandma; Jesse is taking his time getting back to an airport to return home to the States after being dumped by his girlfriend on a Euro holiday. The pair are attracted to each other, talk their way through a train meal and impulsively spend a romantic night together in Vienna. They talk of life, alternately laugh and argue, wax philosophical and seem to trade off between being youthfully optimistic and prematurely jaded. They see the sights, taking in the Austrian nightlife, charm a bartender out of a bottle of wine and do what neither dared say in the process, namely begin falling in love. The sun comes up, life switches back to dreary reality, they go their separate ways understanding “the long distance thing” seldom works. However, they leave agreeing to meet again in six months.

Fast forward nine years and Before Sunset. Jesse is back in Europe, this time in Paris doing a book signing. He’s written a popular novel…based on a young couple spending a magical night together in Vienna. We aren’t left wondering what happened between him and Celine in the years since the train ride for long. She shows up at the bookstore and we find why what seemed to be destined never happened. They decide to spend the few remaining hours he has in town with the Parisienne showing him around her city. More lengthy, thought-provoking conversations take place between the now 30-somethings who have adult lives – jobs, partners, in his case a child – and plenty of problems with them. She plays him a song she wrote for him and he misses his plane. Leaving us to wonder for nine more years if he ever bothered getting on the next.

Until Before Midnight rolled around. The young romantics of the ’90s, upwardly mobile young near-singles of the ’00s are now a middle-aged couple, driving through Greece with their two children. That is to say their two children together; Jesse is crushed by having to send his son from a previous relationship back to the States. He’s now a famous author, has the woman of his former dreams, two cute little girls… and an increasingly bitter marriage. He pines and whines, while her cheerful quirkiness has largely morphed into spiteful anger and mistrust run amok. Their planned little romantic rendesvous away from the children becomes a soul-searching look at their lives together and apart through a psychologist’s microscope. “This is real life. It’s not perfect, but it’s real” he yells at her at one point, underscoring the theme of the entire series. We’re left with her considering that maybe imperfection might be good enough given the alternatives.

Ethan Hawke is a well-known fan of alternative rock. One might think he almost could have used three REM album titles for a shorthand to the three films – Life’s Rich Pageant, Fables of the Reconstruction and Reckoning. A magical fairy tale beginning, putting it all together for real and then dealing with the consequences of having done that.

The trio of movies stand up on their own, but are best seen as an entity. The settings are beautiful – Vienna at night, Paris, the Greek coastline – but the scene stealers are always the conversations between Jesse and Celine. These are movies for those who value dialogue over special effects or complicated plots. It’s crisp, it’s real, it rings true. Although Linklater and Kim Krizan are credited with writing, both Hawke and Delpy edited to their suiting resulting in characters who fully inhabit the actors, or vice versa. The first of the three has a 100% rating on Rotten Tomatoes and the second one was nominated for an Academy Award for best screenplay.

As to whether we’ll see “Before Naptime” (he says snarkily) next year, Hawke recently said all involved like the idea of revisiting the couple again, but it will likely break the timeline and not be in 2022. Still, I hope they will be on screen again, and can only keep my fingers crossed for Jesse that his lady love hasn’t continued on her trajectory towards hostile unlikability!

All in all, I give the trilogy 3-and-a-half lumberjack shirts out of five, but would pick the first instalment as the stand-out for those who only want to see one.