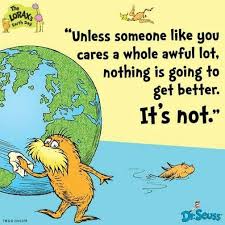 Well I’ll wander into the fray today, because this Thursday I’m thankful for Dr. Seuss. Or, the works of Theodore Geisel, aka Dr. Seuss, during this week in which his birthday fell.

The children’s author and illustrator has been much in the news of late, yet another example of how badly divided this country is. In case you hadn’t noticed, the publisher in charge of his body of work recently announced it was going to stop printing six of his titles, including the popular And To Think I Saw It On Mulberry Street, because some of his illustrations seemed a little racist and out of step with today’s norms. Predictably, many Republicans are frothing at the mouth and yelling “censorship”, failing to note that it was a commercial decision made by a publisher rather than an act of government restriction. Likewise, some of the far-left faction of the Democrats say that doesn’t go nearly far enough and wouldn’t be happy until every reference to Seuss is obliterated from our culture. Which I suppose is a convenient way for both to distract from the fact that Iran seems to be taunting the U.S. in the Middle East at risk of provoking a war and that over 1000 people are still dying from Covid every day in our land.

Geisel fashioned a long and very successful career penning books written for kids through the middle part of the last century. Some, like Green Eggs and Ham and How the Grinch Stole Christmas became cultural cornerstones as well as rites of passage for new parents teaching their young ones. Something over half a billion copies of his works have been printed through the years.

It’s said that Geisel wasn’t that fond of having little children around in real life. But he exhibited a brilliance unsurpassed at knowing what would appeal to them and he delivered that time and time again with his stories. A cat in a hat? Green eggs and ham, Sam? There’s not a three year old in existence who doesn’t giggle at the thought – especially if its accompanied by the zany cartoon illustrations the “Doctor” was known for.

For me, Seuss was “the man” when I was that age. I was lucky to have parents who surrounded me and my brother with a lot of books as kids, but none delighted me quite like the rhyming, goofy stories about Sam-I-Am, the Cat in the Hat, The Grinch and little Cindy Lou Who, or Horton who heard a Who. I looked at the books time and time again, and soon with a little help could read them all by myself. From there, I never looked back…unless it was Christmas time and time to watch the TV version of The Grinch, a beloved holiday tradition I try to keep to this day even as my hair gets grayer. In later years, I went on to work briefly in the conservation field and was able to at times delight campers young and old alike by playing the film of The Lorax, another Seuss story telling of the little creature who tried to save the truffula trees from the industrialist Onceler. Like many of his best works it delivered a strong and worthwhile moral in the guise of a children’s cartoon.

So, yes, Dr. Seuss may not have been perfect and his books were products of his time (as any work of art is ultimately.) But few things made me happier as a kid and now, as I sit by a bookcase full of titles of all sorts, including a couple of ones I wrote myself, I thank him for getting me to know the magic of reading. I don’t know what I’d be doing if not for him… but I doubt I’d be here writing my thoughts for you, dear readers.