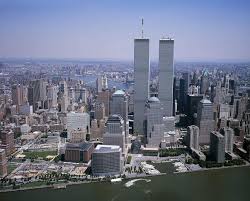 People older than me often talk about remembering exactly where they were and what they were doing when they heard JFK had been shot. It was before my time. I do remember Lennon being killed; it saddened young teenage me but didn’t have that kind of “time stands still” effect people on me people refer to with Kennedy.

To me, so far in a bit beyond five decades and counting, there’ve only been two really big things that changed the world. Not changed my world (things like a parent dying or moving to another country can do that easily but don’t really make much difference in the overall grand scheme of things) but changed the whole world. The first was Sep. 11. And now the second is this Corona virus pandemic.

I remember 9/11 as clear as the skies outside were that morning. I was driving to work, a short commute cross-town, and for some reason I flipped on the AM news channel in the car instead of my usual switching between the in-town rock station and Toronto alt rock one. I think I actually hadn’t heard the previous night’s baseball scores and wanted to catch a sports update. Instead, I got a live news report from New York, about a plane crashing into the World Trade Center. That seemed bad, needless to say, but the radio details were scant at that point. I figured it was some little Cesna piloted by an incompetent novice flyer. Bad, but nothing much to worry about.

Of course, the world changed very quickly that morning. By the time I got into work, the second plane had hit the other tower and they were no Cesnas nor the pilots simple incompetents. 2001 was a different time in many ways, and we had only limited internet at work (and no TVs) but we were not allowed to use the computers to surf the web or do anything personal. That day though, we stood around the monitor at the front desk, owner and hourly people alike, watching the events unfold and getting frequent updates from terrified customers who walked in. At the time, offices like the Chicago Sears Tower and even Toronto’s CN Tower were evacuated because we didn’t know what would come next. There were of course, wild unfounded rumors as there usually are when terrible things occur. At one point in the morning, we were led to believe there were probably a couple dozen more jets up there which had been hijacked and could be targeting anywhere. My sweetie, whom I didn’t know at the time, was in Waco, Texas and scared they would be a target, not so stupid a worry considering then-President Bush had his own ranch just a few miles down the road and was known to fly across the city in a helicopter.

When I got home, I had on the TV – what channel didn’t matter, since they were all doing nothing but cover the story – and phoned my Mom, who was crying. As most of us were.

I guess I went back to work the next day. I don’t really remember. Well, we all know what happened afterwards. Things slowly went back to normal, but it was an entirely new “normal.” Soon the U.S. would be invading Iraq for goodness knows what reason and both they and my Canada would be sending troops into Afghanistan for the futile reason of trying to bring that country into the capitalism-loving, Christian-based 21st Century. Got your shampoo in your carry-on bag? Think again. Homeland Security became not only a new catchphrase but a whole new governmental department. And of course, Middle Eastern people, many of them not even Muslim and almost all of them good, harmless, were viewed under a microscope and with widespread disdain and mistrust.

That indirectly was one of the odd personal effects it had on me (no, I’m not Middle Eastern nor Muslim.) At the time, I’d been laboring away on a novel. I likely had about half of it done, maybe 100 or so pages. I wasn’t absolutely sure of its direction and outcome, and it wasn’t going to be shelved beside Wuthering Heights and The Great Gatsby in the “you must read this book now!” section of future libraries. Nevertheless, I was proud of parts of it and some bits of prose in it.

Strangely though, for what reason I cannot recall now, I’d put in a secondary character who ran a small convenience store in the protagonist’s hometown. The shopkeeper was very friendly and polite… and very foreign looking. Spoke with a strong accent. And midway through the story, he got carted away by the Feds on suspicion of funding a terrorist cell. My protagonist had to work through it all in his head, and figure out if the friendly man behind the grubby counter was an evil mastermind or an innocent victim of rumor and prejudice. (Strangely, as I said, that was not the main storyline, just one tangential to a larger picture of small town life.)

Well, needless to say that got trashed. It seemed inappropriate at best to write somehting like that then, and in fact, at that time it just seemed suddenly a waste of time to write some work of fiction. Trite. The novel ceased and eventually disappeared into a landfill I suppose, with the rest of the hard drive of a now long deceased computer.

I wish nowI’d kept going on it, even if I changed the story around some. In retrospect, the philosophy of the cast of Friends was the right one. They believed, after some reflection, that what they were doing was important, that entertainment was perhaps more important than ever then as people needed relief from the worries and uncertainties of the day. They decided to keep going, make a few subtle signs of respect for the victims in their show but try to make people laugh more than ever. Likewise, the players who went back onto the field to finish the baseball season later that month; they knew the public needed a diversion. But that wasn’t my mindset then.

In the years since, things have gotten back to normal, but it’s not quite as good a “normal” as it was in the spring of 2001, or in 2000. And things kept going along as normal until just a few weeks ago when people started getting very sick in a city in China we’d never heard of…

One Reply to “The Trouble With Normal (Is It Always Gets Worse), Part 1”